An Evening with Sir Paul Collier

On September 25, Oxford Development Economist Sir Paul Collier joined TPW and the Marshall Institute in London to speak about his new book “The Future of Capitalism”. Coming in a week when the British Prime Minister was found to have illegally suspended Parliament and when impeachment proceedings were launched against the US President, the talk was a timely opportunity to explore the role of philanthropy in healing divided societies.

Sir Paul began by discussing how these divisions emerged. He explained how the need to increase productivity in the second half of the 20th century required specialist skills and a good education. This rising complexity caused manual skills to decrease in value as cognitive skills increased in value. Cognitively skilled young people from the provinces moved to the metropolis for education and work, leading to the demographic and geographical ruptures that became clear in anti-establishment votes across the world.

In Sir Paul’s words, “you have one half of the population on the up-escalator for forty years, and the other half on the down-escalator… After forty years of this situation, what you get is mutinies. And mutinies don’t come with forward looking strategies – they are expressions of rage.”

Sir Paul then sketched out some solutions, highlighting the need for a policy of “social maternalism,” where the State supports its citizens without claiming to know best. In one example, Sir Paul identified best practice in European education systems, including the French écoles maternelles (pre-schools), Finnish schools and Swiss vocational training.

“If we put these systems together we have a much better system, just based on existing knowledge… and then we are getting more and more knowledge all the time. The problem is that all of this knowledge is siloed. What we need is a holistic approach to turning a fetus into a 20-something-year-old (able and willing to contribute to society), and a holistic approach to reviving the provincial city. Those are the two processes needed not just in the UK, but across the world.”

Finally, Sir Paul addressed the role of philanthropy in the future of capitalism, opining that philanthropists had a key role as innovators.

“Philanthropy can be enormously powerful because it can innovate. Our States are at the moment in the grip of social paternalism. They are frozen in ideologies – they are not even pragmatic. So the amount of experiment we get is minimal. The tendency of politicians is to say I have got the answer, and I want to do it now and everywhere, and it will work – and of course it doesn’t. What we need is this process for social learning and innovation. The foundations of social maternalism are social learning – experiment, evidence, evaluate, find out what works. Where is this innovation going to come from? The power you’ve got (as philanthropists) is to use exactly the same approach (as you used in the business world) to innovate in the social space, in the places that need innovation. That’s your role.” 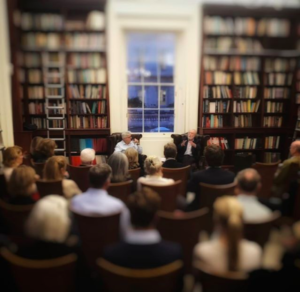 You can access the full audio recording of the event here (please note you will have to be logged in to access the recording.) To get more information about upcoming convenings like the event with Sir Paul Collier, please refer to the Member Community.

We would like to thank Susan Gibson for kindly underwriting the event and the Marshall Institute for their partnership in organising the evening.

What would collectively leveraging the abundant talents & resources our world has look like? Next March, our Community gathers in London for our 2023 #TPWGlobalSummit to explore the theme “Unlock Abundance: Bold Approaches for a Shared Future.” Learn more: https://t.co/PT0N9v4MvZ https://t.co/rMprKgRkTO

The stories surrounding us are of scarcity and suf

In a recent op-ed for @beaconcollab, TPW Managing

Given the challenges our world faces, "We’re bei

Huge congratulations to one of TPW’s newest memb

TPW is thrilled to open its Vancouver office, grow

This month, the LGBTQ+ community and its allies ar

As we continue honoring #Juneteenth, thanks to Bla

Since 2011, @lisa.wolverton has worn many hats at

“Generosity can’t be a substitute for justice.

An estimated 80% of Canadian businesses are family

“Justice, for me, means elevating the lives—an

TPW is seeking a dynamic and strategic leader to b

TPW is proud to be a supporting partner for the U.

We are delighted to announce that will will be par