In November 2017, The Philanthropy Workshop traveled to Jordan on an Immersion Journey to learn more about the country’s response to the Syrian refugee crisis. One of the central lessons learned was that a good refugee policy should be a good host country policy too—any program benefiting the livelihood of Syrian refugees must also benefit the local Jordanian population.

Jordan, a middle-income country with a population of 9.5 million citizens, is home to between 700,000 and 1.2 million Syrian refugees. Despite these daunting figures, Jordan is no stranger to mass refugee migration: the young nation, founded in 1921, hosts approximately two million Palestinian and 130,000 Iraqi refugees, in addition to significant groups of Lebanese, Armenian, Circassian, and Chechen refugees.

Though Jordan has remained safe and secure in a tumultuous region, the fall of neighboring nations has detrimentally affected its economy. For example, Iraq was historically Jordan’s largest trading partner prior to the Iraq War, the Palestinian Territories were major importers of Jordanian goods before the 1991 Paris Protocol, and Syria was Jordan’s gateway to Europe until the route became unviable due to civil war.

On the second day of the program, TPW members had the option to participate in a “business track” led by Per Heggenes, CEO of the Ikea Foundation, who aimed to educate our group about how international businessmen could play a leading role in promoting economic development efforts. As a participant, I visited three different businesses to understand some of Jordan’s advantageous operating conditions, including tariff-free access to European markets, the 16-year-old US-Jordan Free Trade Agreement (FTA), strategic regional positioning and access to Arab markets, and local governmental support for international businesses. 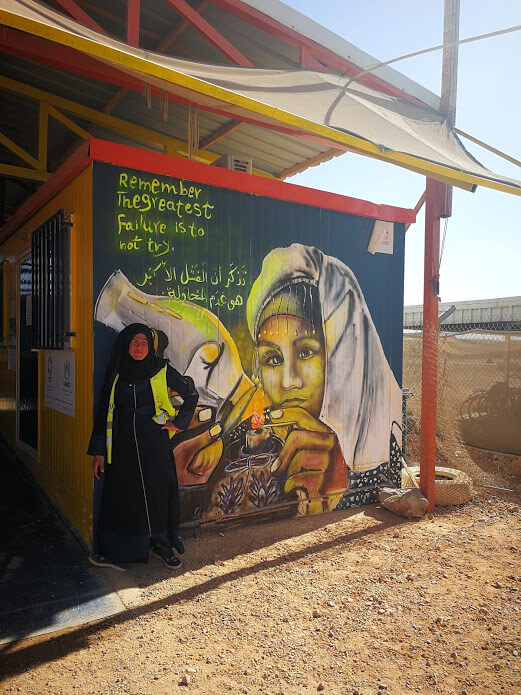 The three businesses we visited included: (1) a 2000-employee textile manufacturing facility that set up shop in Jordan due to its FTAs, (2) a Syrian-owned plastic packaging company that moved its operations and 150 Syrian employees across the border to benefit from the tariff-free access to European markets (granted to businesses in Jordanian Special Economic Zones), and (3) a social enterprise textile manufacturing workshop that employs hundreds of women, receives business support from the Kingdom’s Jordan River Foundation, and has a partnership with Ikea.

Many corporations also establish operations in Jordan to promote corporate social responsibility, but it was impressed upon us that business leaders could not just hire refugees. Development in the Jordanian context means creating opportunities not defined by borders and accepting that jobs created for refugees may be replaced by Jordanians after Syrians return home.

Each of the businesses we visited capitalized on a different competitive advantage for operating in Jordan. Though Jordan remains a success in many regards for cultivating an environment for economic development and activity, the Kingdom has not received enough international attention or support. Jordan will not solve this crisis alone. But that is precisely why the Jordanian government has made such a valiant effort to support the international players who promote Jordanian economic activity by hosting their business operations in Jordan.

Justin Vogel is the son of Susan Sherrerd (TPW 2016 – 2017). He is a graduate of Princeton University with a B.A. in Near Eastern Studies. His work in the field of Near Eastern Studies stemmed from his curiosity about the Arab Spring and the Arab-Israeli Conflict. This was Justin’s fourth visit to Jordan.

In 2022, TPW members deployed $1B with trust, boldly & urgently, and we’re excited to accomplish more together in 2023. Please support TPW as we build a world that works for all people and our planet. @GivingTuesday https://t.co/GViUWkUGqR #GivingTuesday #GiveToday https://t.co/iDJIOvTFyl

Join us in celebrating the shared humanity and rad

TPW is delighted to be an official partner of this

A core TPW principle is that those most proximate

Happy Halloween! If you’re in need of a last-min

The ability to come together to speak openly about

This #IndigenousPeoplesDay, TPW joins in celebrati

On Tuesday, October 18, TPW members will join our

This past weekend, Brazil’s first-round election

By harnessing the TPW Community’s experience and

This National Truth and Reconciliation Day, if you

How can philanthropy support truth and reconciliat

Huge congratulations to TPW member and Founder of