TogetHER for Health: Working Together to Save Women from Cervical Cancer

Kathy Vizas (TPW 2014 – 2015), a Founding Member of the Maverick Collective, traveled to India and Myanmar to meet women with cervical cancer and to learn about their experiences.

It was these early encounters with women who had recently received their own cancer diagnosis, and with the doctors in urban and rural communities working to save them, that motivated Kathy to get involved.

Insufficient screening and vaccination for women and girls around the world has been driven by a lack of urgency and knowledge of cervical cancer. This, in turn, had led to a lack of consistent funding support for a disease that claims the lives of 288,000 women globally each year

After three years of work on the program in India, Kathy wanted to leverage her knowledge and bring in others to support and expand the work. Disappointingly, despite strong results and interest from the communities involved, she found limited financial support, especially from larger donors and foundations.

Driven by the women she had met and the belief that no more women should die from a treatable disease, Kathy spent time learning and working with implementers, advocates, medical personnel and stakeholders to understand the root problems. 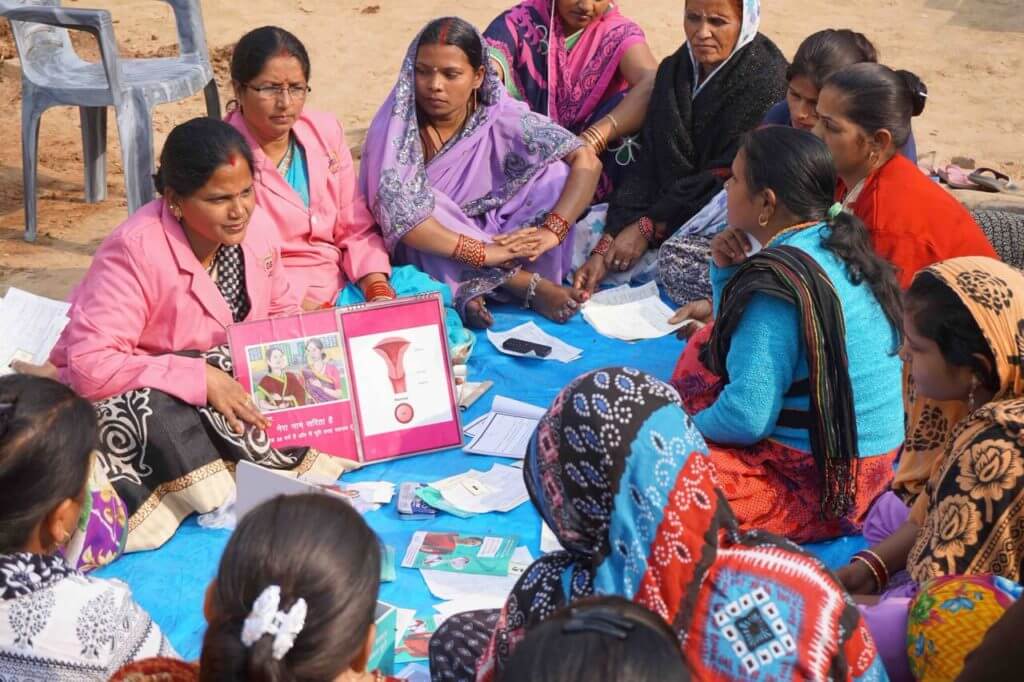 And thus, TogetHER for Health was born.

Working with co-founder and Executive Director, Celina Schocken, TogetHER for Health aims to prevent women dying from Cervical Cancer. The initiative advocates for additional programs and funding for cervical cancer programs, including:

The initiative works with proven implementing partners on the ground to further ensure that more women get access to the screening and treatment they may need.

Following a successful career as a corporate lawyer on the West Coast, Kathy’s time is now more focused on what happens in the homes of women and girls and the clinics of Asia and Sub-Saharan Africa, as well as in the boardrooms and donor meetings of Washington, New York and Geneva. Her skills developed in arguing corporate law are now being used to persuade on the importance of preventing and treating cervical cancer globally.

Kathy Vizas (TPW 2014 – 2015) joined TPW in 2014 to learn the skills of focused and effective giving. Prior to co-founding TogetHER for Health, Kathy practiced law for over 20 years in both law firms and large corporations. She is Board Chair for SpringImpact Inc., which supports social sector organizations achieve scale, and is a member of the San Francisco Committee for Human Rights Watch, and the Advisory Board of the Human Trafficking Legal Center.

What would collectively leveraging the abundant talents & resources our world has look like? Next March, our Community gathers in London for our 2023 #TPWGlobalSummit to explore the theme “Unlock Abundance: Bold Approaches for a Shared Future.” Learn more: https://t.co/PT0N9v4MvZ https://t.co/rMprKgRkTO

The stories surrounding us are of scarcity and suf

In a recent op-ed for @beaconcollab, TPW Managing

Given the challenges our world faces, "We’re bei

Huge congratulations to one of TPW’s newest memb

TPW is thrilled to open its Vancouver office, grow

This month, the LGBTQ+ community and its allies ar

As we continue honoring #Juneteenth, thanks to Bla

Since 2011, @lisa.wolverton has worn many hats at

“Generosity can’t be a substitute for justice.

An estimated 80% of Canadian businesses are family

“Justice, for me, means elevating the lives—an

TPW is seeking a dynamic and strategic leader to b

TPW is proud to be a supporting partner for the U.

We are delighted to announce that will will be par